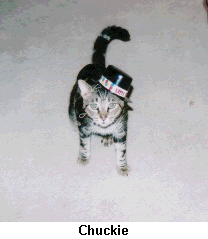 Chuckie and his two siblings were rescued from the backyard of an apartment building in Flushing, Queens. They were four weeks old. Within a few weeks of the rescue, Chuckie had a seizure and almost died.

While his siblings were healthy and placed for adoption, Chuckie continued to have seizures. He was taken to several veteranarians and finally diagnosed with Liver Shunts. He was given to the age of eight months to live. One Vet suggested he be put down when he became " too difficult to handle". But Chuckie had a strong will to live.

This picture is of Chuckie at his 2nd birthday party. The party was attended by 15 of his closest friends--his very own fan club. 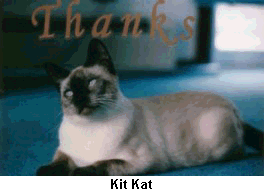 It was about 8:30. There had been a constant deluge of rain all evening. Gusts of wind rattled the window screen. The phone rang and a panicked voice explained that she had just found a saturated, shivering cat under a bush in a neighbor's yard. The woman had dried him off and fed him and within an hour the cat was in my living room. He was a chocolate point Siamese but at the moment he was a pathetic, skinny mess with extremely red eyelids (severe conjuctivitis). He walked with his head tilted and bobbing in a strange motion. All he wanted was to be cuddled. He was very grateful to be indoors, safe and with a full belly. The next day after a trip to the Humane Society, we learned his eardrum was perforated, the result of an infection left untreated. He is permanently deaf in that ear. This is the adorable KIT- KAT as he looks today, living with his wonderful new family. Thank you Lou, Sue and Mike for adopting him and giving him the life he so deserves.  - Sandra  <^..^> 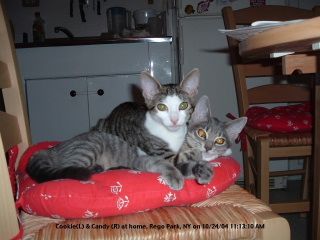 They were 6 weeks old when I rescued them from my backyard but, because they had worms, they looked a lot smaller.  My parents agreed to take them temporarily until I found a home for them but were won over by their absolute cuteness and the kittens never left.

My parents are amazed at how smart these cats are.  When Mom calls Cookie she actually comes.  When the alarm beeps as my mother opens the fire escape window to feed the pigeons each day, the cats come flying into the room and push-- well nudge -- my mother out of the way to get a clear view of the birds.  And you won't believe it but they're learning Chinese, too!  My parents simply say in Chinese "it's time to eat" and they come flying into the kitchen and sit in front of their plates waiting for their meal to be served.  Mom also warns them in Chinese when she's about to use the loud juicer that they hate:  "Mommy is going to voom-voom; better go away now."  And they do.  My parents are so proud of their smart little kitties.  They are all we talk about when I visit them on weekends.  - Elaine  <^..^>

Zap!, The Cat Who Named Herself

It was a cold winter night in Jackson Heights.  I should have been in bed.  I heard noise and movement in the driveway.  I figured someone was stealing my car.  Who cared?  (Someone close to me had died.)  I'd check in the morning. 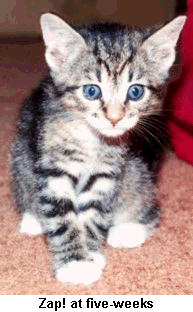 I don't know how I even heard it.  That faint meow.  I rushed outside in my robe.  Next to my car a frightened five-week-old kitten with blue eyes stared up at me.  I scooped her up, brought her inside and smiled . . . for the first time in a long time.

My husband and I struggled to find a name for this kitten we couldn't keep (he's allergic), but nothing seemed to fit.  One day, while I was working on a laptop, she jumped onto the keyboard.  Smiling, I lifted her off.  Then I saw it.  "Zap!".  Sure, the next line was a bunch of nonsense, but not only was "Zap!" clearly set apart by itself; it was also 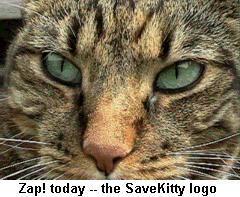 centered.  To do that she had to hit two specific keys at the same time!  So there it was finally . . . her name.

Seeing how happy Zap! made me, my husband insisted we keep her.  Miraculously, he adjusted to her, although he's still allergic to other cats (don't try this at home; its extremely rare). 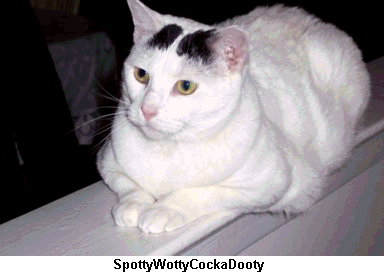 It was about 3 years ago that I was trying to trap 2 sisters who were kitten machines. After an hour of trying, I was about to give up when this white and black cat came along and walked right into the trap.  I said ,"Okay fine. This one can get fixed as well".  I took her to the Humane Society and Sandra DeFeo asked,  "What is the cat's name"?  I replied, "I trapped her in Astoria, so I'll give her an 'A' name -- Alicia."  Sandra replied , "Felicia"?  I said ,"Whatever".  I took her home that day and put her in my spare room.  I thought  Felicia, Alicia? Nah, I' ll name her Blanca!  My husband said, " No way. Her name is Spot". " Okay I said, we'll compromise. Spottywotty. . . . no wait . . .  Spottywottycockadooty. That's it!". So he calls her Spottywotty and I call her Cockadooty.  She responds to anything we call her so it's okay, but she is the only cat in my house with a name with 21 letters.  - Debi  <^..^>

It was the heatwave of 2002. I was watering the garden when something moved. It was Bobo. His mother had abandoned him at birth -- less then an hour earlier!  He weighed 4 1/2 oz. and was smaller than the mini remote of my camcorder. He had to be fed -- and burped -- every 2 hours round the clock and kept in a 90 degree room for weeks.  Kittens this young do not have a great chance of survival without the mother.  But with round-the-clock care and the help of my husband, Tammy C., whose special kitten formula stopped his diarrhea, and the vets at Heights Animal Hospital in Jackson Heights who treated him every day for weeks without charge, he survived.

To this day, no matter how feisty a mood Bobo is in -- even if he's kicking and flailing about -- if I put him in burping position, he collapses into my shoulder and allows me to "burp" him for up to 20 minutes. 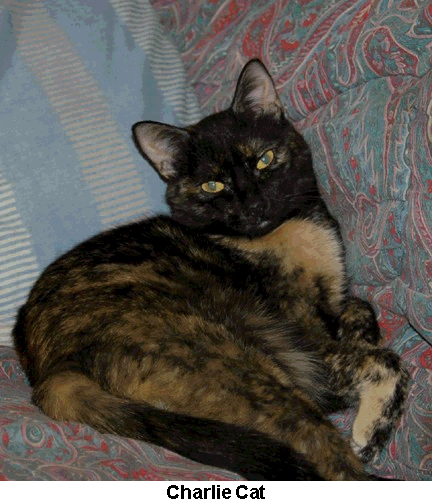 It was a typical summer Sunday at the Ravenswood Houses in Long Island City.  I was feeding a stray cat colony for a friend of mine who was away.  On the way back to my car, I saw a fellow rescuer, Joe M., walking towards me carrying a white bucket.  I joked,"Hey Joe, don't tell me you've got a bunch of kittens in there?"  "Why yes I do", he said.  "I just rescued them from the projects.  A loose dog attacked the litter; I was able to save these two.  The orange one I have a home for.  The tortie needs a home; do you want her?"  "Of course I'll take her I said".  This sweet little 4-week-old tortie was soaking wet inside a bucket with her brother looking up at me, crying.  I took her home, cleaned her up and just happened to show her to my friend Brenda (Secretary of SaveKitty Foundation) who immediatley fell in love and adopted her.  She definitely is a "daddy's girl". She follows her dad, Patrick, around the house wherever he goes. Her name is now Charlie-Cat.  She is healthy, happy and wonderfully spoiled. - Debi  <^..^> 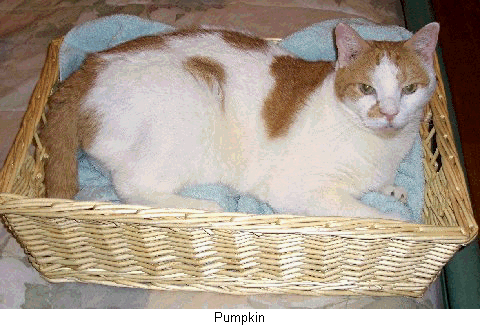 On the way to the office, we stopped for breakfast at the Buccaneer Diner on Astoria Boulevard in Jackson Heights.  As we were leaving the diner we noticed a-one-year old orange and white cat with fur like straw and a face that had obviously been in a fight. This sad looking cat had been begging for food from customers leaving the diner.  The waitresses told us that they would see him every day scrounging for food in the dumpster.  They were afraid he'd be killed, as his littermates had been, by the traffic on Astoria Boulevard.

We just couldn't leave him like that so we opened the door to our SUV.  He jumped in, settled himself in my seat, and went to the office with us.  Now, 10 years later, Pumpkin is Jack's best friend and is the only one of our many cats who has his own bed in our bedroom.  - Sharon and Jack  <^..^>

Note: Sharon and Jack are good friends to SaveKitty Foundation.  They provide all our printing needs at little or no cost through their company, MasterCopy 24/7, in Maspeth, NY